Wimbledon is everything England should be when it’s at its absolute best.  It’s about summer and sport; champagne and strawberries; the green of carefully manicured lawns and the white of tennis players dressed for glory.  Even the line-judges look as if they are about to stroll off court to join a garden party.

This year my lovely friend Sonia and I were lucky enough to have tickets for centre court in the second week.  And my level of happiness was set to ‘historic’. 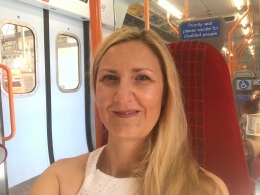 As soon as I stepped out of my front door, I was enveloped in a cloud of contentment.  By the time my train had reached its first stop I was already texting friends and posting photos of my journey on Twitter.  There was a point where I worried I may not actually make it to Wimbledon, but would burst with joy somewhere on the Southwestern Rail trainline.

I arrived about 4 minutes after the gates opened and the entire place was already thronging with people just as excited as I was.  Everyone was chatting , taking selfies, and drinking it all in.  In fact, the incredible friendliness of everyone, from the spectators to every single member of staff, suffused the entire event with good cheer.

Just to be able to sit on Centre Court was amazing (cue posing for multiple selfies, all of which I look terrible in), but to watch Serena Williams play, for me, that is a once in a lifetime experience.  She’s so powerful that it’s easy to overlook how nimble she is around the court and how diverse her game is.  She may not have won the tournament this year, but she won the match we saw, and she was awesome. 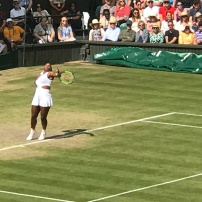 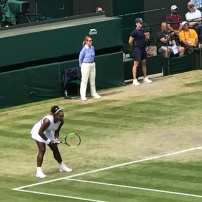 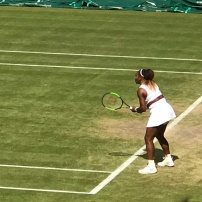 And it wasn’t just the tennis.  We max’d out on the whole Wimbledon experience.  We ate cucumber sandwiches and strawberries and cream, we drank champagne, and we had a cream tea.  And then, when it seemed like the day might be almost over, we blew the doors off it in the Wimbledon shop.  Everyone I know now has Wimbledon sweatbands, Wimbledon socks, a Wimbledon water bottle, a Wimbledon t-shirt, a Wimbledon pin-badge, a Wimbledon pencil-sharpener or some combination of all of the above. 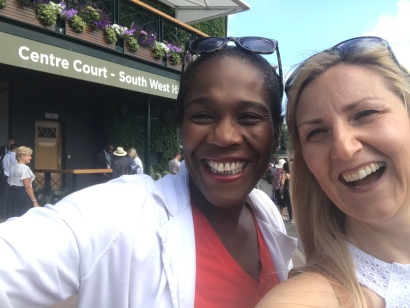 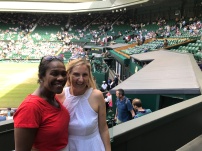 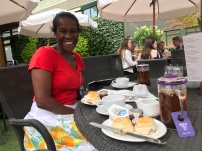 Then we walked back to the train station in the warm evening air, chatting to a young woman who was working as a player escort (getting players to and from their matches).  True to every other member of staff we met, she was an absolute delight.  Not only did she tell us all the ins and outs behind the scenes and blow our minds with the sheer logistics of it, but she waited patiently as I stopped after every third step to take a photo.

Maybe some people who live in Wimbeldon are sick of it, but not the home-owner below, or shoe shop, or bar, or Farrow & Ball… 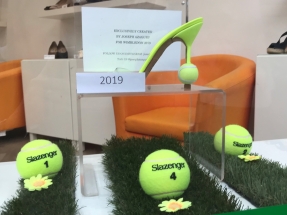 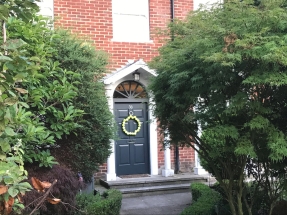 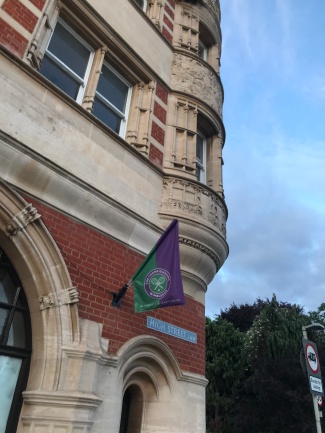 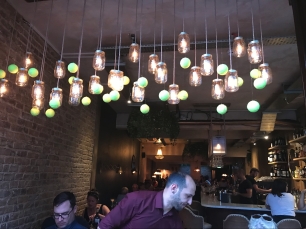 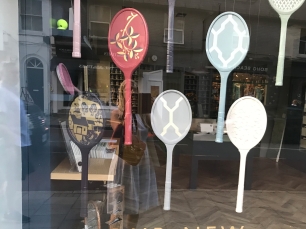 It was the Best. Day. Ever.

So thank you Sonia.  Thank you for organising the tickets and thank you for being there.  I am so lucky to have spent a day I will remember for the rest of my life with one of my best friends.  Big hugs to you.

I’m very partial to watching a bit of Wimbledon on the TV.  I mean, what could be more charming than a sport where people dress all in white and a score of zero is called ‘love’?  This year, I was so excited by it, I decided to get a few games in myself.  Obviously I’m no Serena Williams, but if I let gross ineptitude stop me doing things, I’d never have learnt to drive.

I rifled round the bottom of the wardrobe for my old tennis skirt, but the triumph of finding it was quickly dulled by the pain of realising it is now at least three sizes too small.  To rectify this, I went online and ordered a white one (for a respectfully vintage look) and a pink one (for tennis with a dash of rock’n’roll). 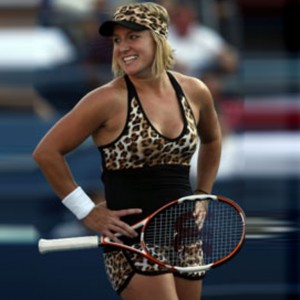 The white skirt arrived the next day, but was too tight to zip up and so short it was practically gynaecogical.  The pink skirt arrived whilst I was out, and was delivered to the local off-licence.

It’s good to know that my neighbours don’t feel the need to buy alcohol before 10.30am, but it’s frustrating to make a special trip to a shop only to find it’s shut.  So the next day I had to make a second visit to the off-licence to collect the skirt I already knew didn’t fit. But the lady behind the counter didn’t want to give me the parcel because I hadn’t brought photo ID.

It could have been that I had an honest face, or maybe she was worried that my hysterical sobbing would put off the other customers, but she eventually relented and handed over a package so massive I looked like I was carrying a fridge-freezer home instead of a teeny-tiny tennis skirt.

And then my luck turned.  Due to high levels of incompetence on my part, it turns out I had accidentally ordered the size I should have ordered if I weren’t so dishonest with myself about the true impact of eating so much cake.  Happy days!

And now I have fallen in love with tennis all over again.  It may be that I play like an over-excited Great Dane – that is to say, with a great deal of enthusiasm but without any actual skill.  But that’s ok, because running round with a racquet in my hand whilst wearing an appropriately-sized tennis skirt makes me brim-ful of joy.  Every time I whack the ball and it lands in, I feel like I’m Roger Federer.

Thanks to party.pack.co.uk for the pretty picture of strawberries and cream which comes from their page about how to throw a Wimbledon-themed party.